WASHINGTON — In addition to an outsize emphasis on business cases, the new Supreme Court term, starting Monday, will feature an array of other important cases, including ones concerning the First and Second Amendments, Congressional power and criminal law. 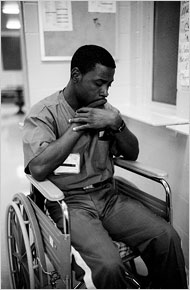 Joe Sullivan, 33, is 20 years into a life sentence. He is one of two from Florida asking the Supreme Court to review life sentences without parole that they received as teenagers.

In 2005, the Supreme Court banned the execution of juvenile offenders on the theory that adolescents are unformed, susceptible to peer pressure and capable of change. The defendants in the new cases say that logic should also apply to sentences of life without parole.

The 2005 decision, Roper v. Simmons, drew on foreign and international law, finding that “the United States is the only country in the world that continues to give official sanction to the juvenile death penalty.” Human rights groups say the United States is also alone in sentencing young teenagers to die in prison.

A case concerning the Constitution’s confrontation clause, Briscoe v. Virginia, No. 07-11191, will test the practical implications of a major decision from June. That decision, Melendez-Diaz v. Massachusetts, held that prosecutors may not rely on crime lab reports in criminal trials unless they also make the analysts who prepared the reports available to testify.

The Melendez-Diaz decision was decided by a 5-to-4 vote, and it featured some unusual alliances. Three of the court’s more liberal justices, including Justice David H. Souter, joined Justices Antonin Scalia and Clarence Thomas, the two justices committed to applying the original meaning of the Constitution. That coalition, in an opinion written by Justice Scalia, said the Sixth Amendment’s requirement that a defendant “be confronted with the witnesses against him” required testimony from the analysts.

The dissenters predicted that the ruling would create a “crushing burden” on the justice system. The new case concerns a challenge to a Virginia law that could limit the impact of Melendez-Diaz. The law allows prosecutors to present crime lab reports without accompanying testimony but gives defendants the right to call the analysts as their own witnesses.

The case will give an early indication of whether Justice Sonia Sotomayor, the court’s newest member and a former prosecutor, will diverge from the approach that her predecessor, Justice Souter, took to criminal cases.

United States v. Comstock, No. 08-1224, concerns the practice of keeping sex offenders in federal prisons locked up after they have completed their sentences on the ground that they remain “sexually dangerous.”

The appeals court in the case ruled that none of the powers granted to Congress in the Constitution authorized it to call for the civil commitment of people said to be “sexually dangerous.” The case does not involve the separate question of whether state prisoners may be held on similar grounds after they have served their sentences.

A cross in the Mojave National Preserve in California that was erected more than 70 years ago as a war memorial is at the center of Salazar v. Buono, No. 08-472. After a federal judge ruled that the cross violated the Constitution’s ban on government establishment of religion, Congress transferred the acre of land on which it sits to private ownership, creating what an appeals court called “a little doughnut hole of land with a cross in the midst of a vast federal preserve.”

The most important free-speech case of the new term is United States v. Stevens, No. 08-769. It concerns a 1999 federal law that bans commercial trafficking in “depictions of animal cruelty.” The defendant in the case, Robert J. Stevens, was sentenced to 37 months in prison for selling videos of dogfights and of dogs attacking pigs. The court has not identified a category of speech beyond the protection of the First Amendment, since it upheld a law prohibiting the distribution of child pornography in 1982.

The court on Wednesday agreed to decide a question left open in last year’s big Second Amendment case, District of Columbia v. Heller, which ruled that the amendment protects an individual right that the federal government may not abridge. The question in the new case, McDonald v. City of Chicago, No. 08-1521, is whether the amendment also applies to state and local governments.